Caelia, The Queen of Incendium is a fierce ruler with many secrets. Her husband, the late King Vulcan fought alongside Merlin as a Knight of Avalon with his Holy Mage guardian, Pyralis. Upon the king’s death Pyralis fell into a mystical slumber to await the new Phoenix King. However, he and Vulcan created a powerful relic. A mystical gemstone known as the Phoenix Tear for Caelia to use in the protection of the kingdom. 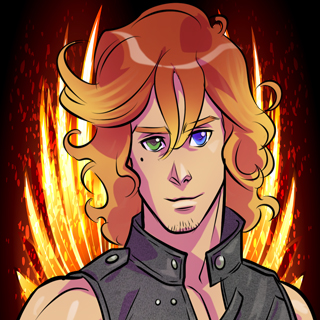 Igocataal is the Prince of Incendium, and possible successor to the mantle of the Phoenix King. He is confident, brave, and humorous with an adventurous spirit. He has trained from a young age in hand to hand combat to prepare for the possibility of taking his father’s place as the King of Incendium, and the title of Phoenix King.

Igo remembers little about his father, but has grown close to his mother and considers his sister, and Pegasus to be his best friends. He yearns to explore other realms, but has never been allowed to venture outside of Avalon.

Vivian is The Princess of Incendium and possible successor to the mantle of the Phoenix King. She is bubbly and kind-hearted, with a playful sense of humor, but takes her magical training seriously to honor the memory of her father, Vulcan.

Vivian often feels overshadowed by her brother, Igocataal. However, she considers him to be her closest friend since they were very young.